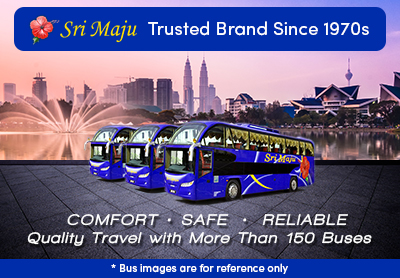 Sri Maju, one of the most trusted express bus brand across Singapore and Malaysia

Sri Maju Group is one of the largest and leading express bus operators in Malaysia which was founded since 1978 by Dato Yeoh Kian Teik, Mr. Ng Yot Chew & Madam Loh Yin Mooi. It has been operated in the express bus industry for almost 40 years. The company began with just 1 coach, has been expanding rapidly to the current bus fleet size of 150 and has plans to increase the number of bus in the future. It serves more than 500 routes daily departures across west coast of Peninsular Malaysia and Singapore.

Apart from that, Sri Maju also provides bus routes depart from Singapore to Malacca, Kuala Lumpur, Hatyai Thailand, Penang and many areas within the western coast of Peninsular Malaysia.

Sri Maju has been reputed for their commitment to provide safe and reliable service to their customers. Besides, Sri Maju aims to create a relaxing atmosphere inside the buses to ensure customers have a pleasant journey when they travel with Sri Maju.

With a reputation for providing service excellence and trusted by many returning customers. Without a doubt, Sri Maju has become one of the travelers’ top preference for express bus.