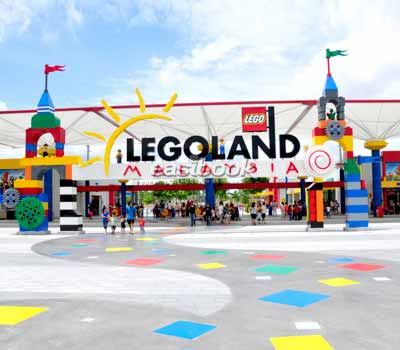 Easybook.com Offering 40% Off For Tour To Legoland Malaysia

Easybook.com is offering 40% off a special one-day tour package to Legoland Malaysia. LEGOLAND Malaysia is the first international theme park in Malaysia and the first LEGOLAND in Asia. There are over 40 attractions, shows and rides offering a fun and interactive experience for the whole family. The park, which opened on September 15, 2012, sits on 76 acres, with seven different themed areas of attraction.

The centerpiece of LEGOLAND Malaysia is the themed area of Miniland. Miniland incorporates over 30 million LEGO pieces built to represent well-known Asian landmarks, such as the Taj Mahal, from over 17 Asian countries. Miniland is an amazing interactive experience, where almost everything is animated; at the touch of a button trains, airplanes and people are brought to life.

The other themed areas are The Beginning, Imagination, LEGO Technic, LEGO Kingdoms, Land of Adventure and LEGO City. The Beginning includes the colorful entrance to the park and The Big Shop, which is the store with the biggest selection of LEGO toys in Asia. Imagination is where people of all ages can invent, create, build and test. It also includes a life size DUPLO express train, a 4D theater and an observation tower where one can see all of LEGOLAND Malaysia and beyond. LEGO Technic has workshops for all ages, as well as high-speed rides, including roller coasters, for the adventure seekers. LEGO Kingdoms is the land of myth and legend and includes a castle and additional rides such as a dragon roller coaster. Land of Adventure has activities and rides in the theme of dinosaurs and pharaohs. In LEGO City, the kids are in charge by driving cars, boats and planes and squirting water cannons.

LEGOLAND Malaysia is a hands-on interactive theme park for the entire family where one can invent, explore, build and share. The park includes over 40 attractions, shows, exciting rides, as well as a variety of shops and restaurants. All rides at LEGOLAND conform to the high international safety standards of LEGOLAND.