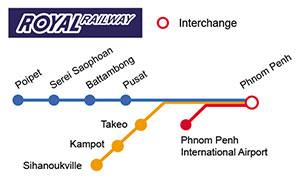 Despite its dark history, the capital of Cambodia known as Phnom Penh has expanded into becoming a must-visit city among tourists from all around the world. The Mekong River provides an exquisite waterfront view complimented by historical monuments scattered all around the city with developments transforming it into a cosmopolitan city. Contrary to Phnom Penh, Kampot, a small province in southern Cambodia provides a more relaxing and subtler atmosphere. A regular train from Phnom Penh to Kampot is now provided via the Royal Railway and passengers can easily book train tickets through Easybook.

Trains from Phnom Penh to Kampot takes an estimated time of 2.5 hours and operates mainly during the weekends from Friday afternoon onwards. At the moment, train operations display limited destinations and timetables but be on the lookout for changes in the upcoming services. It is advised to check the available schedules on Easybook before placing early online bookings to avoid drawbacks.

Travel from Phnom Penh to Kampot with Royal Railway

The Royal Railway provides an alluring ride through the Cambodian countryside with fully air-conditioned carriages. The newly refurbished passenger trains have differing seating arrangements depending on the carriages, either in a bench-style with two benches facing each other or a metro commuter style. Clean as well as decent toilets are available aboard the carriages and passengers can also utilize the kitchen available at the end of each train serving assorted beverages as well as instant noodles. The passenger train also carries cars and motorbikes with a fee.

To get from Phnom Penh to Kampot, the train service will depart from the Phnom Penh Train Station. Easy access to the train station can be made as it is in the centre of the capital city via various means of transportation such as taxis, tuk-tuks and mini-vans. The Phnom Penh Airport also provides a train service that heads directly to the Phnom Penh Train Station. Available nearby the station is a small coffee stand with a Tous Les Jours bakery located opposite the station. Before arriving in Kampot, the train from Phnom Penh to Kampot makes a stop at Takeo Train Station after 2 hours for a 10-minute break where passengers can purchase snacks and drinks by the platform.

Upon arrival in Kampot, the train service will stop at the Kampot Train Station. With fine and extraordinary architecture, the station however is isolated as well as being a little out of town as it lies further north. The station provides travellers with a calm and peaceful village setting from the panorama as well as an almost-noiseless surrounding as there is minimal traffic. From the train station, travellers can get to town on tuk-tuks or rent a motorcycle available at affordable prices.

Things To Do in Kampot, Cambodia

Kampot is a small provincial town of salt and pepper located in southern west of Cambodia. It was initially known as a transit for passengers travelling from Phnom Penh to Sihanoukville via trains on the Cambodian railway as the trains operating on the route will take a short break at Kampot. The serenity of this small town is gradually gaining popularity for travellers looking for an option of escapism from the busy city life.

Making a stop at Kampot will enable travellers to feel the Cambodian lifestyle. Kampot offers laid back vibes with many interesting places for good food as well as outdoor activities. Wondrous attractions include the Bokor Mountain and Kampot Salt Fields where the town is surrounded by various French colonial buildings. Do not forget to try all the scrumptious local food filled with vibrant colours as well as spices including the stir-fried crab made by using the ingredient of the famous Kampot pepper.

The main currency used in Cambodia is the US dollars although its official currency is Cambodian Riel. Kampot is a small town with many undiscovered gems and tourists will definitely enjoy their time here with no worries regarding public safety. Occasionally, rip offs by expensive tuk-tuk fares may happen. It is advisable to bring along a Universal Travel Adaptor as its main power outlets are the two-prong round sockets.

Travellers are advised to plan future trips carefully and prepare for any alterations as the train schedules on the Royal Railway are liable to changes. Follow the simple booking guide here to place early ticket bookings for train from Phnom Penh to Kampot at affordable prices through an easy-to-navigate platform.

Purchase affordable train tickets for trains from Phnom Penh to Kampot where an unexplored sphere awaits. Online bookings can be made conveniently now with effortless navigation through Easybook.com!