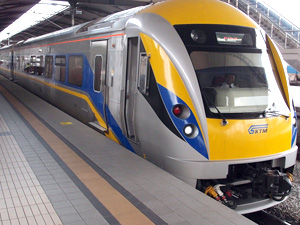 Kuala Lumpur Sentral, or simply known as KL Sentral is without a doubt the largest transit hub in Malaysia that was opened for public in 2001 in Kuala Lumpur. Built as an urban centre for business and lifestyle purposes, this hub supports the KLIA Express Rail Link, KLIA Transit, RapidKL, KTM Komuter, KTM Intercity and KL Monorail Services. Unfortunately, there are no direct trains available from Singapore to Kuala Lumpur if you wish to take the train to KL Sentral, but there are ways of doing so.

KTMB the train company that operates on this route offer their services online and you can also book your train ticket online through Easybook. This also gives you the chance to choose your preferred seat on the train. Pick-up point is at Woodlands Train Checkpoint that you can access these locations with the assistance of local public transport providers such as the taxi and MRT service.

Let Easybook explain how you can travel by train from Singapore to KL Sentral:

1. After Tanjong Pagar railway station has been closed down, Woodlands Train Checkpoint has become the last stop for KTM Intercity service. Singaporeans looking to head up north will need to firstly clear Singapore Immigration and Malaysian Customs and Immigration here at Woodlands Train Checkpoint.
2. You will need to purchase a ticket to Johor Bahru Sentral (JB Sentral). The SGD5 shuttle train via KTM that goes from Woodlands Train Checkpoint to JB Sentral will only take 5 minutes to arrive.
3. Once you have arrived at JB Sentral, you will be required to get on the KTM Berhad train to Gemas in the Tampin District of Negeri Sembilan. Travel time will take approximately 4 hours for this ride.
4. In order to reach Kuala Lumpur, you will need to purchase a train ticket to KL Sentral from Gemas station. With that, you have completed your journey from Singapore to KL Sentral by train.

Now let us get to know more about KL Sentral. This land built across 72-acre is your preferred drop-off point for Singapore to Kuala Lumpur by train. If you are ever in a rush, use Easybook to book your tickets to avoid queuing up at the counters.

Besides being a world-class transit hub, KL Sentral is also surrounded by corporate office towers and business suites, alongside international hotels, luxury condominiums and retail malls, as well as serviced apartments. This transit-oriented development of KL Sentral is also a very strategic location to take you almost anywhere in Kuala Lumpur by the train. Travel by train from Singapore to KL Sentral and you do not have to worry about moving to your next destination.

Once you step out from the gate, you will be greeted by the liveliness of the hub with modern design. Besides being surrounded by the other train services available, there are also convenience stores, automated teller machines and money changer counters made available for you. There are also plenty of food and beverage spots to dine in to feed your hungry stomachs after a long journey to KL Sentral. Whether you are craving for fast food or some simple local food, it is all conveniently available under one roof.

Since you are already at KL Sentral, it would be wise to firstly get yourself a local prepaid SIM card for your smartphone in order to get things done smoothly if you are coming in from Singapore. Rates can be very different so do a little research before choosing either one of the non-contract plans for travelers with calls and data options. Get your seller to help you to activate the internet for you if necessary.

Avoid overpriced taxi services and grab a local train service if you decide to leave KL Sentral even if you are heading into the city centre. The trains will arrive very regularly with various services available from RapidKL to KTM Berhad as well. Be smart and beat the unpredictable traffic in KL as much as you can. Just be reminded of the rush hours especially on weekdays as you might have to fight your way through the crowd with the working folks who will be rushing to and back from work by train to KL Sentral.

For those of you who are looking to spend some extra time in KL Sentral upon arrival, you can check out NU Sentral, which is a mall connected to KL Sentral within a few steps away when you arrive at KL Sentral. Cool down with some air-conditioning at the mall as you grab a bite at one of the many restaurants available there from your regular fast food to delicious local cuisines. Go ahead and do some window shopping at NU Sentral as it stores some familiar retail shops. If you are looking to fill in that extra time, there is also a cinema in the mall for you to catch a movie before your next agenda.

Since KL Sentral is such a centralized point in Kuala Lumpur, it is also a great option to look for accommodation nearby as there are plenty to choose from around the area. No matter the budget, there is something for everyone located just around the corner to save the hassle of going too far when you have arrived in town. You do not have to worry about being late for your train back as the hotels are usually within walking distance from KL Sentral.

If you are adventurous and looking to step out of the hub to check out what the locals are up to, walk out from the NU Sentral mall’s main entrance on the way to the KL Monorail station and you will find yourself on the other side of Jalan Tun Sambanthan also known as Brickfields which one of the pioneer settlements in Kuala Lumpur. In Brickfields, you will be able to soak in lots of culture as you can find the Buddhist Maha Vihara Temple and the Sri Sakthi Karpaga Vinayagar Temple here, including the 50-year old Three Teachings Chinese Temple, which is a major landmark in Brickfields. Don’t miss trying out delicious Indian cuisines at Vishal Food & Catering or the oldest and famous Chinese restaurants in Brickfields called Restoran Sin Kee. This is also a massage haven and usually they are inexpensive that many locals would come to this side of town for a relaxing massage to reenergize their systems.

There are many great reasons to grab a train from Singapore to Kuala Lumpur with Easybook, or wherever you may be but the most obvious one would be to enjoy the wonderful scenery en route to KL. It’s also a great way to catch up on things you haven’t been able to do like finish reading your favourite book or watching your TV shows on your tablet. Go grab your ticket for train from Singapore to KL with ease through Easybook’s website and mobile app right now.