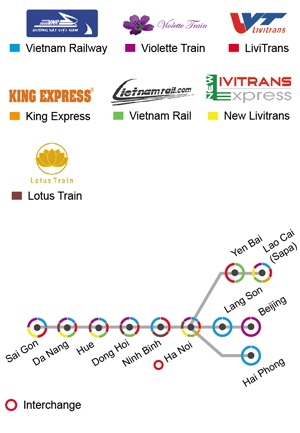 About Train Service From Hanoi to Danang

Hanoi, the capital city of Vietnam is an important railway station point of the country. It is a big transit point in Vietnam where travellers can take the train from Hanoi and head to their favourite destinations. As Da Nang in Vietnam is also one of the popular travel destinations in the country, travellers can get access from Hanoi to Da Nang with the train services available in Hanoi Railway Station upon booking the train ticket through Easybook!

As the railway station from Hanoi to Danang is about 791 Kilometers and the journey from Hanoi to Danang takes about 16 hours, the overnight train are more popular among the locals as well as the travellers. They have the opportunity to sleep at night and arrive at the destination the morning of the next day. Night trains aid in saving the cost for accommodation as well as earning a daylight travel time.

Travellers can also enjoy the view of a beautiful countryside after waking up from the night train travel before arriving in Danang. The overnight trains from Hanoi to DaNang also have food counters on board the train. Travellers can get various meals or bring along their own food and eat on the night train whenever they are hungry.

Choose from the overnight train to luxury train, as well as the VIP train from Hanoi to Danang through Easybook according to individual preference.

Things to do in Da Nang

Da Nang is the third largest city in Vietnam and it is famous for natural landscapes from the green mountains to the soft sandy beaches. One of the major attractions in Da Nang is the Bana Hills, popular among locals as well as travellers from all around the world located outside of the city center about 45 minutes by car. This famous mountain resort also offers other attractions such as the French Village, pagoda, amusement park and French Garden. Cable cars are the mode of transportation for travellers to get to the top of the hills.

Among the high-ranking beaches in Da Nang are Non Nuoc Beach and My Khe Beach, which are famous for its long white stretch of sandy beaches in splendid conditions with cafes nearby. Beach enthusiasts will love spending their time on these beaches as it is surprisingly less crowded with tourists. Travellers can spend time on the beach side by renting shaded beach lounges while listening to the calming sea waves.

Key in your preferred travel destination together with the date and we will get you the train schedule as well as the price list. Pick the Vietnam train schedule that suits your travel plan best and proceed to grab the train ticket online now by following these few simple steps to begin the Hanoi to Da Nang adventure!