North Jakarta (Indonesian: Jakarta Utara) is one of the five cities (kota) of Jakarta, Indonesia. North Jakarta contains the entire coastal area within Jakarta Special District. In North Jakarta, an area at the estuary of Ciliwung river was the main port for the kingdom of Tarumanegara, which later grew to become Jakarta. Many historic sites and artefacts of Jakarta can be found in North Jakarta. Both ports of Tanjung Priok and historic Sunda Kelapa are located in the city. The city, which had 1,645,312 inhabitants at the 2010 Census, has its administrative centre in Tanjung Priok. North Jakarta contains some of Jakarta's original natural mangrove forests. As the city has developed, some of this mangrove forest was converted into urban areas. However, a reforestation project aimed at planting mangroves within an area of 400 hectares has already been enacted and is scheduled to be finished in 2012. The main goal of the project is to minimized abrasion in the coastal area, especially around the Pantai Indah Kapuk area.[1] North Jakarta is bounded by Java Sea to the north; Bekasi to the east; West Jakarta, Central Jakarta and East Jakarta to the south; and Tangerang to the west. 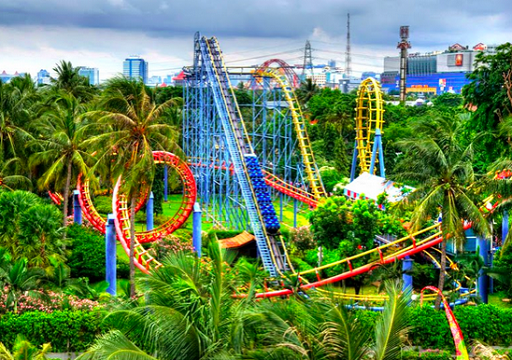