Take a ride with KTM train to Segamat 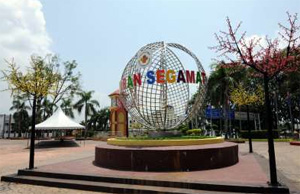 Whether you are planning to tour Segamat or you are just checking in for other commitments, it's a welcoming town both for running your errands and touring around in Johor. Train is one means among others through which you can get there. If you want to connect to Segamat from its neighboring towns, choose to use the convenience of trains as a great deal punctual. You can connect to Segamat from all major towns such as Kuala Lumpur, Tankak, Batu Pahat and Muar, these journeys average to around 3 hours.

If you are coming in from Singapore by train to Segamat for instance, the journey normally takes 3 1/2 hours, tickets cost around from SGD14 to SGD20 plus. All trains operate daily and tickets have to be paid for in Singapore dollars just at the same rate as the train's fare. Buy your train ticket for any various journeys to Segamat online through the easiest way - Easybook.com.

KTM Train Company offers sole train services in Segamat. KTM intercity provides train tickets on a daily basis to major towns across Peninsular Malaysia and is the main train operator there. All its trains are diesel powered locomotives. Famous stops for KTM in Malaysia include; Butterworth, Kuala Lumpur, Kluang, Singapore and Ipoh. KTM Komuter is another service operated by KTM, this one uses electrified commuter trains to provide sub-urban railway services.

KTM Berhard has partnered with Easybook.com to offer its tickets smoothly through Easybook's ticket platform. You can avoid pulling legs on queues and buy your ticket quickly through the fastest and safest way, which is online only on Easybook.