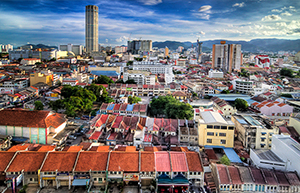 Penang is a state situated at the North side of Peninsular Malaysia coast. As it is surrounded by two other beautiful states of Kedah and Perak, the visual beauty of the place is unparalleled. Penang maintains the balance between the cityscape and the natural beauty quite well that keeps the tourists coming back for more. At the same time, the wide variation in the culture, ethnicity, religion and language makes them more inclined to pay a visit to the city. The rich heritage that the city and its adjacent areas have drawn the tourists more and more each year. Train to Penang from KL are easily accessible through a few easy steps on our Easybook website and app.

Butterworth is the main town on the mainland of Penang and is considered the transportation hub for trains and bus, as well as the terminal for the Penang ferry. The stops here are those who do not travel direct to Penang Island. The largest town in Seberang Perai that covers half of the entire state of Penang is also known to be more industrial compared to the other places in Penang. Getting a train to Butterworth has never been easier now with our service at the palm of your hands.

Although the duration of the train journey is slightly longer than the bus by an hour or so, but most tourists prefer the KL to Penang train journey because of the picturesque landscapes, stations and cultural variations that they can experience. Now that the ETS trains have started, it only takes four hours to reach Penang from Kuala Lumpur. These trains are faster than the intercity trains and can be booked easily online beforehand. The trains will most likely be packed on public and school holidays, so advanced booking is highly advisable.

The Butterworth railway station is 1.4 km next to the ferry terminal Pengkalan Sultan Abdul Halim located along Jalan Bagan Dalam, which makes it very convenient for everyone to get around. Originally built in 1967, the KTM Railway Station was then demolished and reopened in 2014 for a modern facelift. This included the inter-city train service between KL and cities in the country via KTM Electric Train Service (ETS). ETS train to Penang have shorten the travel time to approximately 4 hours as the express trains operate at a maximum speed of 160 km per hour with about 350 passengers on board.

The two types of ETS trains from KL to Butterworth that depart from KL Sentral are ETS Platinum with up to 8 stops that comes with complimentary snacks and ETS Gold with up to 11 stops but no complimentary snacks. Make sure you are going on the right platform once you have gotten your tickets via Easybook and head over to the ETS platform. It should be fairly straight-forward but if you are unsure, don’t be afraid to ask the helpful concierge nearby.

What can you do upon arriving in Penang?

The Nine Emperor Gods Temple - There isn’t a shortage of temples when you are in Butterworth and The Nine Emperor Gods Temple located at Jalan Raja Uda is a must-visit. This temple overlooking the sea celebrates the annual Nine Emperor Gods (Kew Ong Yeah) on the ninth day of the Chinese Lunar Calendar. According to old Chinese beliefs, the Nine Emperor Gods are spiritual mediums believed to dwell in the stars in heaven, so temples hold ceremonies to welcome the gods. Constructed in the year 2000 by 50 craftsmen from China, the temple also known as The Butterworth Tow Boo Kong Temple is built with 3 grand prayer halls. It is filled with stunning views that you do not want to miss out on and it is just 10 minutes away from the train station by car.

Penang Bird Park - Approximately 7 minutes away from the KTM Railway Station by car, the Penang Bird Park is located at Jalan Todak in Seberang Perai. With more than 300 species of birds from around the world, this is considered the largest bird park in Malaysia spread across 5-acres of land. With a beautiful landscape park that is covered by beautiful flowers and plants, as well as natural ponds, it has become a home for flamingos, storks, pelicans, swans, herons and ducks as well. You will also find other animals such as mouse-deers, arapaima fish, estuarine crocodile, pythons and tortoises around. Get a chance to feed the birds at the Penang Bird Park too if you want.

The Apollo Market - With over 500 hawker stalls spread across Jalan Raja Uda just 15 minutes away from the train station, you can find everything from vegetables to clothes. There used to be a bar called Apollo that became the landmark for the market because it doesn’t have a name, in which it sticks on until today. 50 years ago, Apollo Market had a small set-up to cater to local residents who had to travel far to get their fresh items. The business was doing so well, it had to relocate to the permanent site in 1978 as it was congesting the residential area. More and more stalls are opening up at The Apollo Market making it a one-stop centre for everything. Come see what the local fuss is all about.

Suling Hill - Half an hour away out the train station by car is Suling Hill, a hill and meditation retreat located at Mengkuang, Bukit Mertajam. Also known as Bukit Langkap, it is beautiful with well-kept grass that overlooks George Town in the distance. This is definitely a great escape from the bustling city life as you soak in the serenity, as well as taking a stroll down to the fruit orchard while you are there. If you are lucky enough, you might be able to join in the durian season at Suling Hill.

ETS trains to Penang are super popular during festive seasons, so it is smart to do the right thing by beating the queue and book your KL to Penang train with Easybook without having to leave your seat. You should also consider renting a car in Penang  through Easybook as well to move around more easily.