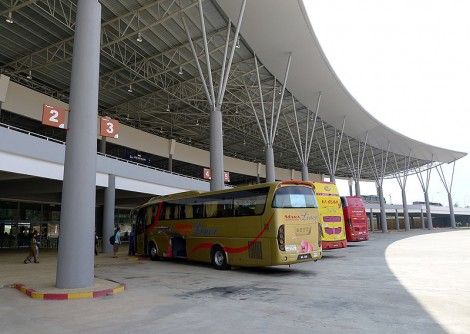 Looking to go somewhere and be close to nature without having too spend too much money or travel too far away? You do not even need to fly out of the country to enjoy that when we live in a tropical country with so many exciting adventures. The largest state in Peninsular Malaysia is located in Pahang known for its boundless rich nature like the highlands, rainforests, beaches and great food. Pahang’s capital city of Kuantan is famously recognised for its major seaport and a busy tourist hub.

Kuantan is surrounded by beautiful beaches such as Teluk Chempedak, Batu Hitam and Cherating as well as a glorious coastline with several sightseeing attractions in town worth exploring. This city is a major stop for many bus routes which provide platforms for arrival and departure coach services from north, south or across the peninsula. Travellers can get direct bus services to Terminal Kuantan Sentral to experience the enchantment of Kuantan once they book their bus ticket through Easybook.

Where is Terminal Kuantan Sentral?

Terminal Kuantan Sentral is considered the biggest terminal for public transportation in the East Coast of Peninsular Malaysia as it is a major hub that links Kuantan to other major cities across the country. The new and improved Terminal Sentral Kuantan (TSK) replaces the Makmur Terminal on the 1st August 2013 to serve as station for express buses as well as local city buses. Buses from other important cities like Singapore, Penang and others are also available at this terminal.

Located at Bandar Indera Mahkota, which is also a well-developed and vibrant township in Kuantan, it also functions as the main road for road users from Kuantan to use the East Coast Expressway (LPT) via Kuantan Interchange. The cheapest way to reach Kuantan is by coach and there are plenty of bus operators with daily routes between Kuantan and other locations within Peninsular Malaysia at Terminal Kuantan Sentral.

There are a number of bus companies that operate at Kuantan’s TSK that allows you to have comfortable bus journeys. Here are some of the more popular routes and its accompanying operators you can choose to book with via Easybook.

Place to visit in Kuantan

Teluk Cempedak Beach – This is known as the main sightseeing attraction in Kuantan which is very well-known for its clean, blue sea and beautiful greenery surroundings. It is the perfect place to relax and enjoy sea breeze with your family and friends.

Sungai Pandan Waterfall – It has amazing waterfalls with a big natural swimming pool at the bottom made perfect for swimming. You can even arrange for a barbecue session or go on a camping trip with your buddies.

Sungai Lembing Museum –Exhibits from the tin mining industry in Malaysia that has helped shape the Sungai Lembing’s history is being showcased here. Visitors also have the chance to explore the real underground tunnel that are ranging from 12 to 200 feet in height which been preserved well since the World War II. Located just a short distance away from the museum is the popular Panorama Hill where visitors can enjoy breathtaking view of the sunrise after a 45-minute trek.

Kuantan River Cruise – Visitors are able to go on an adventure to discover the Mangrove Reserve Forest which has been in existence for over 500 years, as well as witnessing the modern skyscraper buildings along the traditional fishing village settlement. Sight-seeing service is also available for you to book at the Kuantan River.

Balok Beach – Acknowledged as one of the best beaches in Malaysia for windsurfing and kite-surfing, Balok Beach is located 15 KM to the north of Kuantan. Besides enjoying these amazing sports while you are there, you will also be able to check out the turtles laying eggs between the month of May and September if you are lucky enough.

What to eat in Kuantan

Curry laksa – This dish is spicy, creamy and sweet. It is usually served with steamed chicken, cockles, bean sprouts and tofu puffs. You would not want to miss out on the curry laksa when you travel to Kuantan.

Cendol Air Putih– Also known as the Kuantan Cendol, the cendol has a salty edge from coconut milk and a slight sweetness palm sugar added into the ice shaving. You can choose to add red beans or glutinous rice as the topping. This is a pretty good dessert after spending time in the warm outdoors.

Satay – It is a grilled marinated meat of lamb, beef or chicken that tastes juicy, tender and flavourful. Satays are best eaten with the special peanut sauce, which is awesome snack for your taste buds.

Royal Puding (Puding diRaja) – This signature delicacy of Pahang is often served exclusively to the royal family on special occasions, as well as during traditional Malay weddings and other festivals. The main ingredients include banana, prune and cherries, then added with cashew nuts, delicateness of popular sweet treat jala mas that is made from egg yolks and custard sauce poured on top to give it an extra kick to the dish.

Don't miss out on these amazing sights and food when you book a trip to Kuantan that alights you at Terminal Kuantan Sentral. Book your bus tickets with us today at Easybook now with just a few clicks on our website or mobile app available to download for free. Follow this simple step-by-step guide on How to Book Bus Tickets and you will be on your way to Kuantan. Happy travels!